At Jelovica hiše, we received the EC certificate of conformity and put the CE marking on our products, energy-saving houses and larger buildings. The CE marking confirms that the product complies with the European standards for mechanical resistance and stability, fire safety, durability and safety of use.

The CE marking on the product or its packaging confirms that a product manufactured in a European or other country meets the European Union requirements regarding safety of use, health sufficiency and environment protection as well as other requirements of standards or European technical approvals.

At Jelovica hiše d.o.o., we have signed the Declaration of Conformity with which we state that our houses comply with the Construction Products Directive 89/106/EEC and the European technical approval ETA – 10/0310.

The EC Certificate of Conformity was issued to Jelovica hiše, as the first Slovenian manufacturer of prefabricated houses by the Slovenian National Building and Civil Engineering Institute (ZAG) under the number 1404 – CPD – 1654. 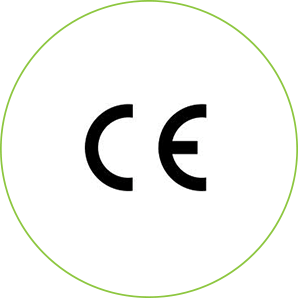 In addition to the CE marking, defined by the European standards, we also prove the quality of Jelovica houses with the RAL Quality Mark, which is important especially for the sale of prefabricated houses on German and Swiss markets. We have had the RAL Quality Mark for over 20 years and renew it annually (twice per year) on the basis of production control by the OTTO GRAF Institute in Stuttgart.

The RAL Quality Mark is the mark of the Association of German Prefabricated Building Manufacturers, based on the DIN 1052 standard. It is a quality mark for the manufacture of wall, ceiling and roof elements. The control (own-control and independent (external) control twice a year) is performed over the quality of installed materials which all need to be certified. Materials and their installation is controlled. We only install certified wood into all our buildings that is also controlled for moisture.

The required wood moisture according to the standard is 15±3%, because wood with moisture below 20% and installed in a dry area is resistant to fungus and insects. The behaviour of wood is also mitigated.

The PEFC logo/mark ensures that the product comes from a forest managed in a sustainable manner, and that it is not obtained from any other questionable sources. Buyers and potential future customers can use this information when choosing a product manufactured on the basis of environmental protection and other principles.

The general aim of implementing the PEFC logo/mark is to stimulate the supply and demand for products that originate from forests managed in a sustainable manner, therefore encouraging permanent marketing improvements of the global forest resources by communicating accurate and verified information that is not misleading.

The document is based on the general principles of eco-labels and declarations specified in ISO 14020:2000. 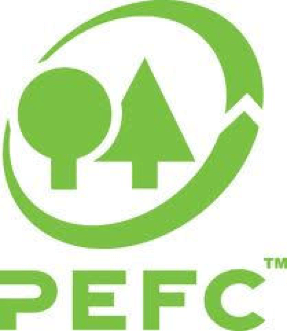 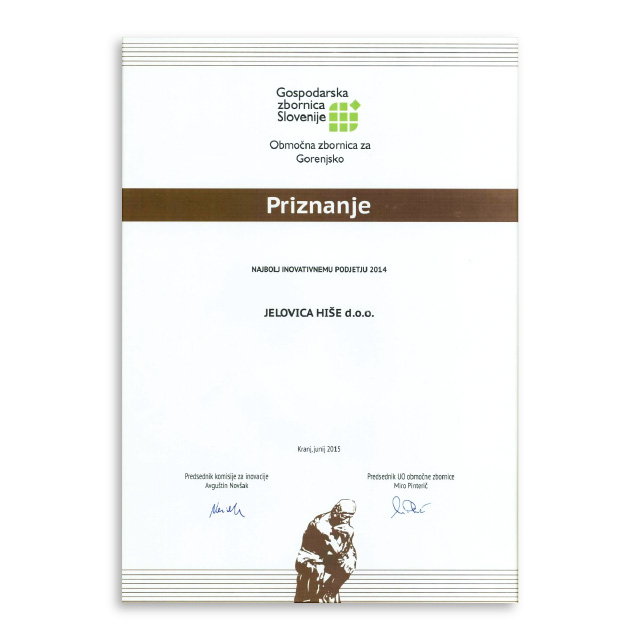 Award for the most innovative company

The Chamber of Commerce and Industry of Slovenia for the Upper Gorenjska region awarded Jelovica Houses with a high commendation for innovation. The award for the most innovative company of the Upper Gorenjska region in 2014 is a testament to the company’s good work with which it continues to gain reputation and trust among numerous investors both at home and abroad.

It is precisely the innovations which are the fruit of knowledge and long-time experience that represent the driving force of the company’s development and market flexibility for increasing the sales of demanding buildings, especially on foreign markets where Jelovica sells most of its wooden houses and larger buildings.

Jelovica also convinced the Chamber of Commerce and Industry of Slovenia for the Upper Gorenjska region with the fact that it is the first Slovenian company with the energy self-supply in the manufacture process based on renewable energy sources (sun – water – biomass).

Jelovica received an award for innovation, awarded by the Chamber of Commerce and Industry of Slovenia for the Upper Gorenjska region. The award was received by Jelovica hiše d.o.o. for innovation in the construction of wooden buildings. This innovation refers to the construction part in the manufacture of a wooden multipurpose hall, which enables an extremely quick placement of buildings, because all elements of the building’s construction are produced in the factory before the assembly. The innovation helps create favourable circumstances when enduring large pressures and tensile loads, which is particularly important in case of an earthquake. The sustainable aspect of innovation was also an important criterion, and Jelovica as a green company received the most commendations. 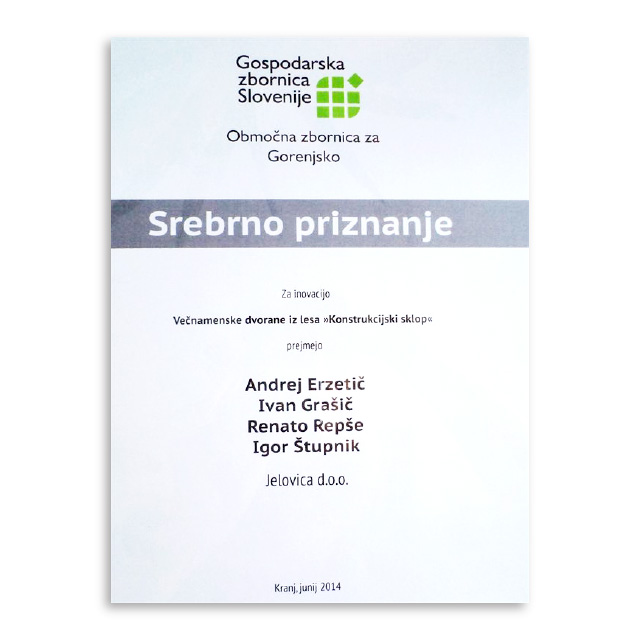 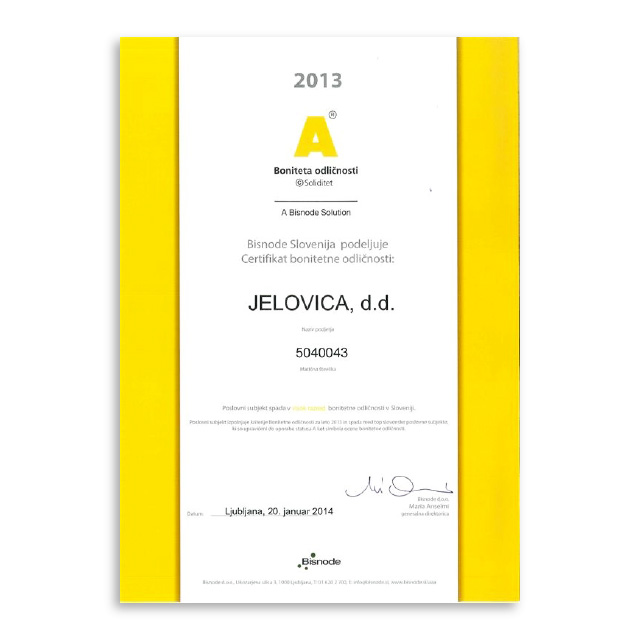 In January 2014, Jelovica d.d. received a prudential assessment of excellence, which shows the above-average prudential value of the company.

It is based on the financial statements of Jelovica d.d. for the past financial year and predicts the prudential supervision for the upcoming twelve months.

Companies with prudential excellence conduct their business on an above-average level and fulfil the criteria for the decreased likelihood of recording critical business events in the following twelve months.

In the international environment, where Jelovica also conducts its business, certification of businesses is an established practice. This way, business entities further consolidate their reputation and trust in the domestic as well as foreign business environments. The certificate holders thus gain additional trust from their business partners.

The certification was performed by the Bisnode group, which has a long tradition in presenting certificates of credit excellence in European countries.

Our energy-saving houses built throughout Italy also meet the high standards of the ClimateHouse energy efficiency certificate. The marking is synonymous with energy saving, high level of living comfort and active climate protection. The agency awards the certificate to a particular house on the basis of the energy performance certificate, which shows the consumption of energy.

Over the course of six years, more than 1,000 buildings have been certified as climate-friendly houses, because they actively protect the climate and preserve up to 6,000 tons of CO2 per year, which is equal to saving 3 million litres of fuel oil. The positive image given by a building that successfully passed the certification process further convinces investors to opt for an energy-saving method of construction. 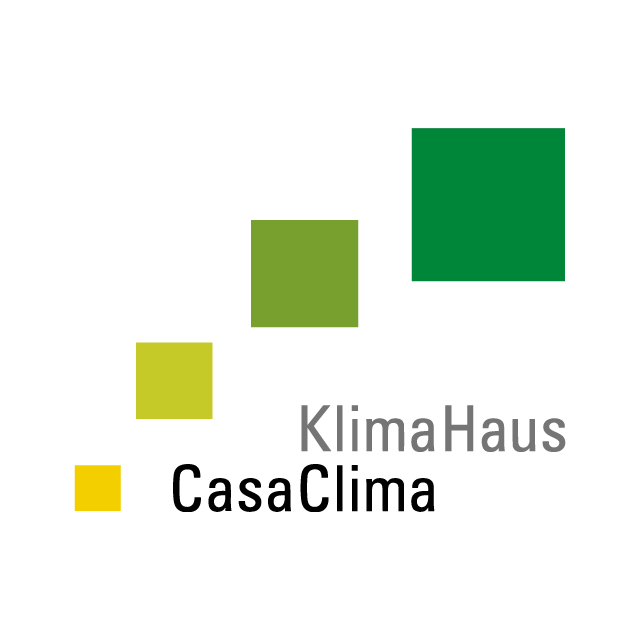 At the 2013 International Home Fair, we received the Green Mission Award for a passive wooden nursery in Preddvor.

The Green Mission Award, presented by the Ljubljana Exhibition and Convention Centre together with the Association of Wood and Furniture Industry at the Chamber of Commerce and Industry of Slovenia, represents an energy-saving and eco-friendly product throughout the entire life cycle.

The panel of experts wrote in the account: the sample structure is an example of an energy-efficient building constructed in environmentally friendly processes and from eco-friendly materials. It is an example of good practice that significantly influences the change in attitude towards sustainable construction in Slovenia. This is a product that can be replicated again and again both in Slovenia and abroad, and many buildings can be constructed in the same manner.

You can find more about the award at: Chamber of Commerce and Industry of Slovenia website

The energy efficiency of wooden houses is ascertained by the Swiss Minergie certificate. We also demonstrate the quality of our houses in Switzerland with our Minergie membership and certification.

The Minergie certificate proves that Jelovica houses are low-energy and that they are constructed in an environmentally friendly manner, which increases the market value and trust in Jelovica houses. In Switzerland, Minergie is recognised as a low-energy standard, for which we have developed special wall, ceiling and roof constructions at Jelovica.

In order to acquire the Minergie certificate, we selected a rather complex multi-apartment house with several storeys, which we completed at the end of 2011. The house will be self-sufficient in terms of energy, because in addition to the heat pump, solar collectors and photovoltaic panels for the production of electrical energy are also installed. 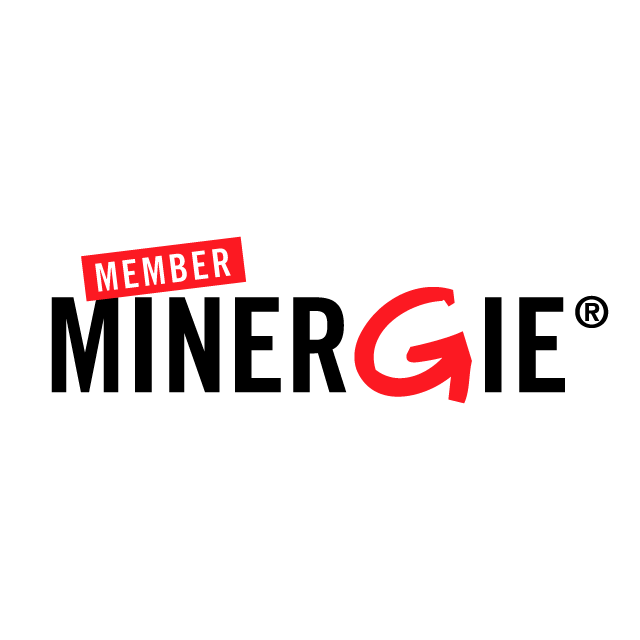 Award for an energy-efficient project

In 2011, Jelovica hiše received the award for an energy-efficient project for its wooden low-energy and low-carbon nursery chosen by readers of Finance newspaper.

Together with Esplanada d.o.o., Jelovica hiše designed and constructed a modern wooden prefabricated building which combines energy-saving properties with the use of eco-friendly materials. The building’s modern architecture and innovative technical solutions give the living spaces a pleasant atmosphere. The facade coat is designed as a ventilation element, while biomass floor heating, air conditioner with highly efficient heat recovery, and an adiabatic air cooling system further reduce the consumption of energy.

With this award, we demonstrate our responsibility towards nature in developing low-energy and every-saving wood products.

Award for the most eco-friendly product

At Jelovica, we once again proved that our leading position in the manufacture of environmentally friendly and energy-saving products is well deserved when we obtained the award for the most eco-friendly product. At the Environmental Meeting organised by Finance newspaper in collaboration with the Eco Fund, the Jelovision energy-saving wooden window received an award for an eco-friendly product. The window is made from eco-friendly materials and attains high values of thermal insulation.

Jelovica has thus proved once again that its innovations achieve the highest quality standards and energy efficiency requirements. 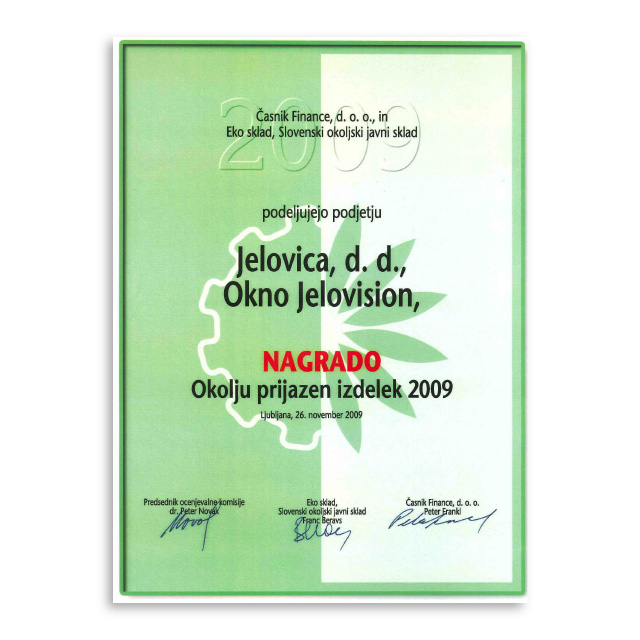 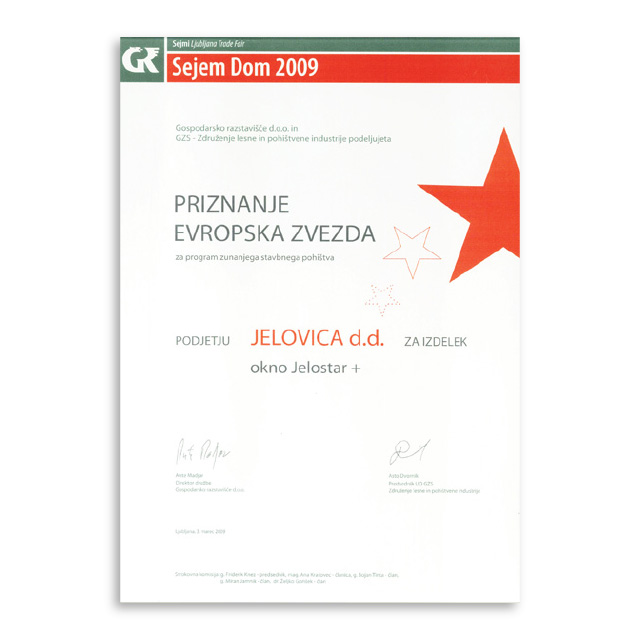 The award went to the Jelostar+ energy-saving wooden window, first presented right at the 2009 International Home Fair. The windows are just one of Jelovica’s many energy-saving products.

In 2004, we received the Quality Mark in Construction, presented by the Building and Civil Engineering Institute ZRMK. 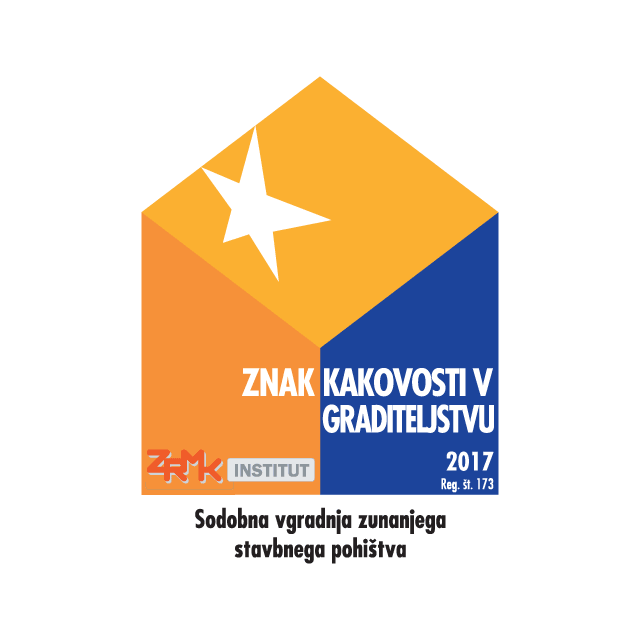 Become a part of our story